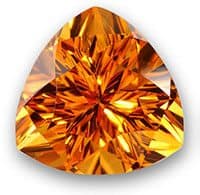 Those born in the month of November can claim the topaz as their birthstone. Spoiled for choice, lively topaz occurs in a wide range of colours- white (colourless), pink, red, yellow, green, blue, brown and black. From the Sanskrit, meaning fire, it was one believed that topaz could regulate heat- cooling boiling water and reducing high fevers. As an emotional salve, topaz was said to subdue unwarranted anger. During the Middle Ages, those wishing to cultivate imperial favour, and gain royal patronage would wear a topaz charm engraved with a falcon.

Ground topaz added to wine was thought to prevent asthma, staunch bleeding and cure insomnia. Poor eyesight was supposedly improved by rubbing a wine-soaked topaz onto the eyelids. Often associated with solar deities, the Egyptians believed that the topaz contained the energy of the Sun God Ra, while the Romans associated the gem with their god of sun, Jupiter. These affiliations made the topaz a very powerful talisman, protecting wearers from harm. They were also used to detect poison- the colour of gem transforming in the presence of tainted fare.
Symbolic of constancy, friendship and strength, the topaz purportedly releases tension and balances emotions. The curative power of the topaz is at maximum capacity during the full moon.

Said to be a perfect gift, topaz will “warm” the heart of the fortunate recipient.

“Who first comes to this world below
With drear November’s fog and snow,
Should prize the topaz’s amber hue,
Emblem of friends and lovers true.”
Birthstone Poems, 1870, Tiffany & Co, author unknown.