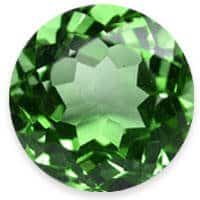 The reigning monarch of the beryl family, emerald is the birthstone for the month of May. Increasingly rare, a fine quality emerald may in most instances be more valuable than a white diamond of the same size. The unparalleled green colour is due the presence of trace elements chromium and vanadium. More so than any other gem, colour is a principal determinant of worth. When buying an emerald look for even, intense colour saturation. Virtually all natural emeralds will contain characteristic inclusions; these distinctive “fingerprints” are considered part of the character of the stone and generally, do not lessen an emerald’s value. The eponymous “emerald cut” enhances the inherent beauty of this gemstone, whilst also protecting it from “mechanical strain”.

This lush, verdant stone has captivated and beguiled us for well over six thousand years. Traded in ancient Babylonian markets as early as 4000 BC, the emerald has adorned many historical figures. Aristotle, a great devotee of the gem, referenced them in his writings, particularly urging parents to hang them around the necks of their children as protection against “falling sickness” (epilepsy). A sash worn by Alexander the Great was decorated with an array of dazzling emeralds. Eclipsing both men’s emerald adulation though, was Cleopatra. Her voracious appetite for the stone was satisfied by an impressive supply from her personal emerald mine. Not only did she festoon herself with layers of emerald and gold necklaces, she would present emerald set jewellery to visiting dignitaries as parting gifts. Nero allegedly viewed gladiatorial battles through a large, transparent emerald; supposedly, he found the colour soothing!

Emeralds have featured in the mythology, and the religious beliefs of many civilizations. The Incas and the Aztecs, regarded the emerald as a holy stone. According to Greek myth, the god Hermes wrote the laws of magic on a large emerald tablet. The Romans offered emeralds to the goddess Venus, symbolising the fecund potencies of nature. Biblical lore stated that when Lucifer was cast out of heaven, an emerald fell from his brow and transformed into the chalice known as the Holy Grail.

Traditionally, emeralds have been symbolic of good fortune, fertility, regeneration, eternal youth, wellbeing and fidelity. Purportedly, after placing an emerald on the tongue, one could foretell the future. Over the centuries, these stones have protected the wearer from a myriad of ailments both mental and physical. It was said that emeralds would ward off spells of enchantment, soothe irritated eyes, cure insomnia, anxiety and depression, detoxify the blood, strengthen the spine, ease the pain of childbirth, and improve the function of the lymphatic system. Multi-talented emerald is at the pinnacle of its power during the full moon; ostensibly increasing mental acuity, generating creative energy and instilling an unwavering sense of justice upon those fortunate enough to call it their birthstone.

“Who first beholds the light of day
In spring’s sweet flowery month of May
And wears an emerald all her life
Shall be a loved and happy wife.”