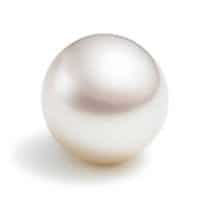 Those born in June are privileged to call the pearl their birthstone. This organic gem has been used for decorative purposes for more than five thousand years; early trading dates back to 2500 BC.

Produced either naturally or by cultivation, pearls are found in seawater or freshwater bi-valve molluscs, mostly of the oyster variety. A tiny irritant such as a piece of shell, accidently enters (or is deliberately nucleated into) the mollusc where it lodges itself in the soft inner mantle. The host responds defensively by coating the foreign material with smoothing, concentric layers of nacre. The mollusc will continue to secrete nacre until the irritant is entirely encased, and thus no longer constituting a threat. Consisting of the mineral aragonite and the protein conchiolin, the nacre ultimately produces the glowing gem we know as the pearl. Pearls formed within the tissue of the mollusc are more likely to be either spherical or pear-shaped, and it is these shapes that are most sought after for jewellery purposes.

The majority of pearls produced today are culture- raised, and harvested from oyster farms. Of the millions of oysters nucleated every year, only a small proportion survive to produce gem quality pearls. When considering the time taken, and the many ruinous obstacles an oyster may encounter during the cultivation process, it is truly a momentous event when a fine quality pearl appears. Once harvested, pearls are sorted by size, shape, colour and lustre. “Lustre refers both to a pearl’s brilliance, the way its surface reflects light, and its inner glow- the way it refracts light.” Graded by lustre in terms of high to low, high-lustre pearls are bright and have a deep-seated glow, while low-lustre pearls appear chalky, overly white and dull.

A unique aspect of the pearl is that it requires no measure of faceting or polishing to reveal its true form; their luminous beauty is present in their natural state.

Evocative of grace and classic feminine style, the pearl’s popularity is manifestly undiminished by the passage of time. Pearls come in a variety of colours, (black, grey, white, cream, yellow, green, blue and mauve) shapes and sizes, satisfying a wide range of tastes and age groups.

Representing loyalty, modesty, longevity and purity, pearls have been variously described as tears from the moon, or dewdrops from heaven.

“Who comes with summer to this earth,
And owes to June her hour of birth,
With rings of pearl on her hand
Can health, wealth, and long life command.”