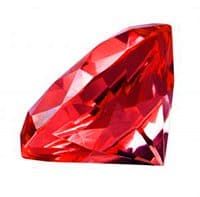 Ruby, the rose sister of sapphire, belongs to the corundum family and is the birthstone for those born during month of July. Look into a ruby and you will see the very life essence of the heart of Mother Earth- or so it was once believed.

Often referred to as the “glowing stone” or the “lamp stone’ ancient Asian cultures regarded the ruby as self-luminous; legend told of radiant rubies being used as lanterns and lighting entire rooms. Nowadays, we can appreciate how this legend came about. Rubies from one particular geographical region fluoresce so intensely, that the effect is evident even in ordinary sunlight; these rubies literally glimmer in the sunshine. A ruby’s fluorescence is one of the properties that can often determine the stone’s place of origin.

Named for the Latin word ruber, meaning red, rubies where once thought to be ripened sapphires. A member of the “big four” of precious gems, the ruby can range in colour from a light raspberry red to the rare and favoured, intense blue- red known as “pigeon’s blood” red. The level of chromium and iron present in a gem, will determine a ruby’s shade.

Representing integrity, devotion, courage, vitality, confidence, strength and happiness, the romantic ruby is said to arouse the senses and stir the imagination. Maro Polo relates a tale where the Emperor Kubla Khan offered up an entire city in exchange for one, gigantic ruby belonging to the King of Ceylon. The Emperor was sadly disappointed when the monarch refused to part with the mesmerising ruby- apparently “all the treasures of the world”, would not entice the king to part with the magnificent gem.

During the Middle Ages, rubies were worn to guard against wicked thoughts and impure desires, and were said to assist in settling disputes. Reputedly, the ruby also held the power to warn its owner of approaching calamity; it is believed that Catherine of Aragon predicted her own demise when she witnessed the darkening of her ruby jewellery. Predicator or not, this vermillion gem remains an everlasting symbol of robust health, wisdom and romance.

“The glowing ruby shall adorn,
Those who in July are born;
Then they’ll be exempt and free
From love’s doubts and anxiety.”