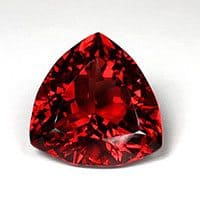 Be it, the earthy red of the Pyrope, the mystical violet of the Rhodolite, or the spearmint green of the Tsavorite, January’s garnet signifies trust, friendship, purity and constancy. While the most recognizable garnet is the brownish-red tones of the Pyrope garnet, there are in fact, over a dozen different garnet varieties, spanning a diverse colour spectrum. While all garnet varieties have a similar crystal structure, their chemical composition differs somewhat.

Derived from the Latin “granatum”, meaning pomegranate, garnets where so named for their resemblance to the fanciful fruit. Evidence supports that garnets decorated the jewellery of several ancient cultures from the Egyptians, the Sumerians, the Greeks, the Romans and the Aztecs. As with many precious stones, garnets were once believed to hold magical, talismanic and medicinal powers; they were said to protect the wearer from poison, fevers, and nightmares. In some cultures, ancient warriors believed that garnets would ensure victory, and later, during the Crusades, the garnet was thought to defend against wounding and misfortune. Conferring fidelity and cheerfulness upon those who wore a garnet, the stone, like the ruby, was thought to warn an owner of approaching danger, by changing colour. During the Middle Ages, the garnet was a popular keepsake between friends, symbolizing abiding affection.

A talisman for self-awareness, commitment and regeneration, the garnet remains a popular choice in contemporary times.

“By her who is this month, January, is born
No gem save garnets should be worn;
They will ensure her constancy,
True friendship, and fidelity”