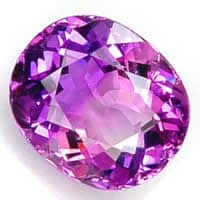 Purple is a colour synonymous with a wide range of positive emotions and imagery. Close your eyes and summon this colour- “feel” the colour… regal, sacred, courageous, devout, patient, majestic, mysterious, uplifting, calming, spiritual, creative, wise, luxurious, proud, magical, feminine, nurturing, empathic ….it really does conjure up an assortment of visual delights. February’s amethyst encapsulates all, or any, of these descriptors.

Amethysts range in colour from a faint lilac to a deep purple, and they are the best known gem variety of quartz. Scientific opinion is divided over what gives the stone its purple hue; some say it is the presence of iron oxide while others attribute the colour to the occurrence of manganese. This gem is heat sensitive and when exposed to increased temperatures, will change colour. Amethysts are the “sister” stone of citrine; heat an amethyst at a very high temperature and the gem will morph from amethyst’s purple to citrine’s golden yellow.

Worn since antiquity, the Greeks believed that amethysts would prevent intoxication, and the word amethyst is in fact derived from the Greek word “amethystos”, meaning, sober. To stave off the intoxicating effects of alcohol, the ancients would purposely serve their wine in goblets made from amethyst. Exploiting its stabilizing effects, those “drunk” on love where once advised to wear this stone near their hearts. Used as amulets for its calming, tranquil influence, the amethyst is symbolic is of peace and sobriety.

Purple is a colour long associated with royalty, and as such, amethysts have been historically recognised as insignias of power. Catherine the Great and Cleopatra, both royal powerhouses, favoured amethysts; the Egyptian queen was said to have worn an amethyst signet ring engraved with the image of Mithras. A Persian deity, Mithras represented the Divine Idea- a source of light and life. Saint Valentine, he of February’s Valentine’s Day and the patron saint of lovers, was also purported to have worn an amethyst ring. High ranking clergy in Christian churches have traditionally worn amethysts and it is often referred to as the stone of bishops.

A gem rich in history and legend, there is even evidence that amethysts were used as decorative stones by prehistoric humans, as far back as 25, 000 years ago. They have had a wide range of uses- from medicinal applications, to warding off sorcery, from dispelling sleep to sharpening the intellect. Whatever the objective, amethyst’s bewitching allure will long continue to captivate us.

“The February-born shall find
Sincerity and peace of mind,
Freedom from passion and from care,
If they, an amethyst will wear.”