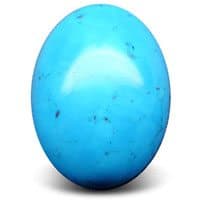 Grounding, distinctive, vital turquoise energises those born in the month of December. Thought to unite the earth and sky, turquoise centres both the physical body and emotional centres. To dream of turquoise signifies a solution is at hand. This opaque stone is perhaps the first decorative adornment used by mankind.

For centuries Turquoise has been recognized as possessing the power to protect riders from injury due to falls. First used as amulets by Turkish soldiers, on their persons and attached to their bridles and trappings, it later came to be used for protection against falls of any kind. [Kunz, 109] Turquoise is also reputed to be influenced by the physical condition of the person who wears it. It is thought to grow pale when its owner is sick or sad, lose all color when the person dies, and gradually recover its color when transferred to a new healthy owner, its color deepening each day. [Fernie, 268]

Historically, Turquoise is credited with the property of securing friendly regard, verifying the traditional saying that “he, or she, who owns a Turquoise will never want for a friend.” [Fernie, 37] In the Orient, a Turquoise ring was worn as a protector against all things evil. The proverb states: “Given by a loving hand it brings with it happiness and good fortune.” However, the ring emitted protective energy only if the stone was given by a friend. It was believed to restore clear vision to the mind when the thinking became muddled and thus ensured good fortune. [Mella, 111]

Turquoise has always been valued as an ornamental gem, often considered a symbol of male power. Anselmus de Boot, court physician of Emperor Rudolph II, wrote in 1609 that Turquoise was so highly regarded by men that no man considered his hand to be well adorned unless he wore a fine Turquoise. [Kunz, 111] Today, we know Turquoise empowers men and women equally, and worn or carried, it is a talisman of luck, success, ambition and creativity. [Eason, 239]
In the workplace, Turquoise promotes leadership, assists relocation or regular travel associated with career, and helps avoid unwise investments. It helps overcome writer’s block, and is a stone of clear communication when giving information; an especially good amulet for those who work in the law, or for local or central government. [Eason, 41, 239] Turquoise is especially recommended for accountants and computer operators for mental relaxation, for those who work in radio or television to release anxiety, and for laborers to protect from bodily harm. [Mella, 129-132]

As a crystal for travel, Turquoise protects you and your possessions against theft, loss or attack, helps prevent accidents, especially falls, and even guards your pet. [Eason, 41-42] Attached to a collar, bridle, or cage, Turquoise prevents animals from straying or being stolen, and makes horses sure-footed and obedient to their riders. [Eason,

Turquoise is a stone for self-forgiveness, self-acceptance and the release of useless regrets. It encourages us to honor ourselves as a creation and a tool of the Divine. [Ahsian, 420]

Turquoise is a strengthening stone, good for exhaustion, depression, or panic attacks. It enhances physical and psychic immune systems, supporting the assimilation of nutrients, alleviating pollution and viral infections. It is anti-inflammatory and detoxifying, reducing excess acidity and benefiting gout, rheumatism, and the stomach. [Hall, 306][Gienger, 89]

Turquoise assists in problems of the brain, eyes, ears, neck and throat, especially cataracts, migraines and headaches, and problems with balance. [Eason, 239]

By healing the breath, this stone may cure speech disorders such as stammering. [Megemont, 187]

Turquoise is a most efficient healer, providing solace for the spirit and well-being for the body. [Hall, 305] It benefits the overall mood and emotion by balancing and inducing a sense of serenity and peace. Holding or wearing Turquoise helps restore depleted vitality and lifts sagging spirits. It relieves stress and brings focus back to the center heart. [Simmons, 420] It is empathetic and balancing, helping one to recognize the causes of happiness and unhappiness, and to master them. [Gienger, 89]

As a stone of purification, Turquoise dispels negative energy and clears electromagnetic smog from the environment. It helps stabilize mood swings, and dissolves a martyred attitude of self-sabotage. [Hall, 306] It is also empowering if you feel bullied or suffer prejudice.

It is a fresh, welcome energy that moves us to serenity as new growth and life emerges. It brings hope, discovery and balance. Turquoise tempers excesses, restores calm after a storm, relieves stress, and neutralizes extremes. It helps us moderate aggressiveness and deal with rage. It brings us back to center. In lighter shades, Turquoise energy promotes inner harmony and peace through spiritual understanding. Darker, richer tones bring considerable power — and flexibility. They counter intolerance and let us adapt to new ideas and environments.

Turquoise is considered by some to be a symbol of good fortune and success, believed to bring prosperity to its wearer.

Its name is believed to originate from the French phrase “pierre turquoise” meaning “Turkish stone” because turquoise was brought to Europe by Venetian merchants who first acquired it in Turkish bazaars. It is also considered by some as a love charm. When received as a gift, the turquoise symbolizes a pledge of affection. Shakespeare used this lore in “The Merchant of Venice’. In it, Leah gave a turquoise ring to Shylock when he was a bachelor, hoping it would win his affections so he would ask her to marry him. In Russia, the turquoise is popularly used in wedding rings.

Turquoise is one of the earliest known stones to be used in jewelry. Pharaohs of Early Egypt wore them. A tomb excavated in 1900 contained the mummified remains of Queen Zer, who ruled in 5500 B.C.; found on her arm were four magnificent turquoise bracelets. Beads dating back to 5000 B.C. have been found in Mesopotamia (now Iraq). In Iran, turquoise was the national gemstone, adorning thrones, daggers, sword hilts, horse trappings, bowls, cups, and ornamental objects. Senior officials wore turquoise seals decorated with pearls and rubies. In the 7th century A.D., turquoise pieces inscribed with passages from the Koran and Persian proverbs were valued amulets. It was used as jewelry in ancient Siberia, around the Fifth and Sixth century B.C. During the Middle Ages, they were popularly used as decoration of vessels and covers for manuscripts. And it was again popular as jewelry during the Renaissance. It has also been found in ancient burial sites in Argentina, Bolivia, Chile, Peru, Mexico and Central America. The Incas crafted beads and figurines out of it, and the Aztecs made pendants and ritual masks.

Turquoise has a rich history in the American southwest. Native Americans have been using this gemstone to create magnificent jewelry and ornamental pieces for the past several thousand years. It was called “Chal-cui-hui-tal”, meaning “the highest and most valued thing in the world”. The Zuni, Hopi, Pueblo and Navajo Indians made magnificent necklaces, ear pendants and rings. The blue in turquoise symbolized the Heavens, and green symbolized the Earth. The stones were used by medicine men to work charms. The Navajo believed that turquoise pieces, thrown into a river while offering a prayer to the rain god, would bring much needed rain. Apache lore held that a turquoise attached to a bow or gun would ensure accurate aim.

There are many superstitions associated with the turquoise. In the Third century, it was believed to protect its owner from falling off a horse. A change in color revealed the infidelity of a wife. Twelfth century Arabian writings said “The turquoise shines when the air is pure and becomes pale when it is dim.” They also believed that its color changed with the weather. Persians said that the reflection of the new moon on a turquoise stone brought good luck, and guarded against evil. It was said to have a healing effect on the eye-merely looking at it strengthened the eye, while placing it on an inflamed eye brought a cure. A 15th century philosopher attributed its change of color to its ability to attract poisons. It was a barometer of its user’s health, turning pale in illness and losing color in death, yet regaining its original beauty in the hands of a new and healthy owner.

Turquoise stimulates the initiation of romantic love, and promotes spontaneity in romantic issues. It is believed to change color to warn of impending danger or to indicate infidelity in thought or action. [Melody, 669]

Spiritually, Turquoise heals and cleanses both the energy centers and the physical body. It acts to induce wisdom and understanding, and to enhance trust, kindness, and the recognition of beauty. [Melody, 669] What we wish for ourselves — happiness, love, freedom of limitation and fear — when extended to others by letting go of our insistence of “justice” and viewing others through compassion and forgiveness, we receive those gifts back through our own heart. [Simmons, 420]

Turquoise enhances the ability to see all aspects of ourselves, good and bad, and to integrate these aspects into a cohesive whole. While it is tempting to try and rid ourselves of the traits of self that are not entirely enlightened, Turquoise, like an ancient Grandfather ally, reminds us that all experiences are valid and that mistakes are simply another experience. Wholeness can only come when we are willing to embrace all of who we are and what we have learned. [Ahsian, 420]

Turquoise reflects the color of the world at the vernal equinox, as the blues of winter melt into the greens of spring. It is a fresh, welcome energy that moves us to serenity as new growth and life emerges. It brings hope, discovery and balance. Turquoise tempers excesses, restores calm after a storm, relieves stress, and neutralizes extremes. It helps us moderate aggressiveness and deal with rage. It brings us back to center. In lighter shades, Turquoise energy promotes inner harmony and peace through spiritual understanding. Darker, richer tones bring considerable power — and flexibility. They counter intolerance and let us adapt to new ideas and environments.

“If cold December gave you birth,
The month of snow and ice and mirth,
Place on your hand a turquoise blue;
Success will bless whate’er you do”