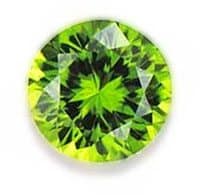 The appealing peridot is the birthstone for the month of August. Among the oldest known gemstones, this transparent variety of olivine was once regarded as the symbol of the sun. The peridot is recognised as an idochromatic gem- this means that the colour of the stone is derived from its chemical composition alone, and not from the presence of minor impurities. Therefore, peridots are only found in shades of green, characteristically ranging from lime to olive.

The peridot has a long association with royalty across several cultures. The ancient Greeks thought peridots conferred a regal dignity upon the wearer and the Ottoman Turks famously bejewelled their sultans’ thrones with this gem. Worn not only as beaded necklaces, peridot was also in popular use as pendants, rings and intaglios with Roman nobility. Once called “evening emeralds”, peridots were said to ward off evil spirits. Returning Crusaders brought them back to Europe where they featured predominantly in clerical ornamentation. The peridot was also favoured by Russian tsars- a staggeringly large 192 carat olive green peridot is part of the Russian crown jewels. (Sizeably more impressive, is the reportedly largest ever, cut peridot, weighing 310 carats which is currently housed in the Smithsonian.)

Found in both meteorites and volcanic lava, the peridot is symbolic of the tears of Pele, the Hawaiian goddess of fire and volcanoes. From the Arabic word “faridat” meaning the gem, the peridot is also known as chrysolith. Representative of love, truth, loyalty dignity and protection, the peridot is said to host magical and healing powers.
The ancients believed the peridot was gift from Mother Nature- a springtime stone indicative of lightness and compassion. Excellent for balancing the heart chakra, cleansing peridot protects against negative emotions and supposedly has a healing effect on the gall bladder and the liver. This harmonising, green gem exudes a renewing energy; easing relationship discord, whilst extinguishing the negative emotions of jealousy and anger.

The true beauty of the peridot is supposedly only revealed to those with a pure heart and a clear mind.

“Wear a peridot or for thee,
No conjugal felicity;
The August-born without this stone,
‘Tis said, must live unloved and lone.”